Lawsuits targeting business websites over ADA violations are on the rise 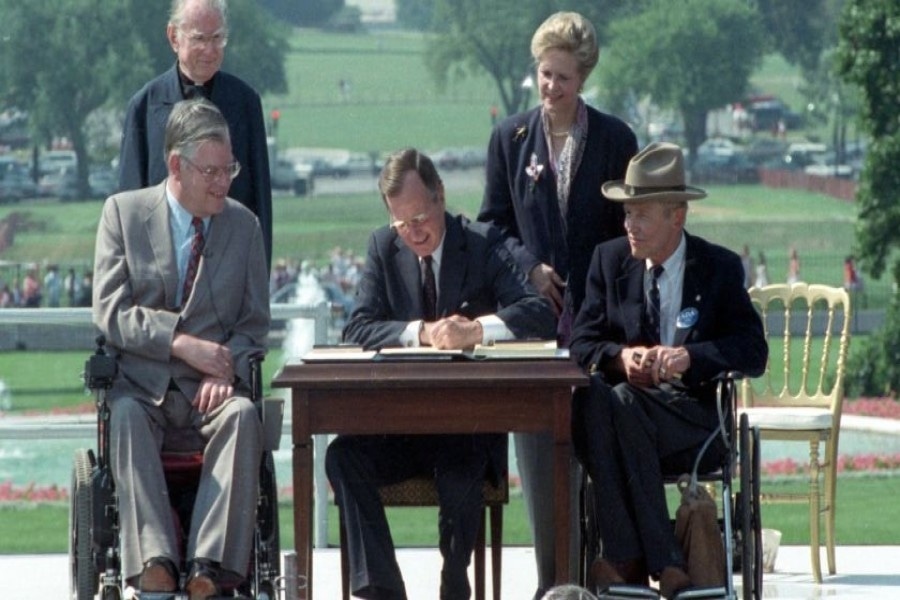 President George H. W. Bush, center, signs the Americans with Disabilities Act during a ceremony on the South Lawn of the White House on July 26, 1990. The act has been cited in an increasing number of lawsuits against businesses over the accessibility of their websites. (Barry Thumma / Associated Press)

The boutique Avanti Hotel is known for its poolside, dog-friendly rooms. Yet its website uses the valuable opening page not to highlight the Palm Springs inn’s amenities, but to explain, in stark black letters on a plain white background, that the Avanti violated the Americans with Disabilities Act.

Like thousands of other businesses in the United States, the 10-room hotel on East Stevens Road has been sued because it hasn’t fully complied with the 1990 law that requires public places — hotels, restaurants and shops — to be accessible to people with disabilities.

But Avanti isn’t being accused of failing to build a wheelchair ramp or install handrails — common charges in the scores of ADA lawsuits in years past. Instead, the lawsuit contends that the hotel’s website can’t be used by people who have problems seeing or hearing.

Avanti Hotel and others have been caught up in a recent wave of ADA lawsuits targeting websites across the country. The Trump administration’s decision to stop drafting rules for website ADA compliance is widely seen as opening the floodgates to legal action.

Nearly 5,000 ADA lawsuits were filed in federal court for alleged website violations in the first six months of 2018, according to an analysis by Seyfarth Shaw, a law firm that specializes in defending such cases. The firm predicted that the number of lawsuits will climb to nearly 10,000 by the end of the year, a 30% increase from 2017.

With online sales, reservations and job postings now a huge part of modern commerce, advocates for the disabled say websites need to be as accessible to everyone, just as brick-and-mortar stores, restaurants and schools are.

“We have been dealing with website issues for a long time,” said Jeff Thom, past president and government affairs director for the California Council of the Blind. “We want compliance. It is a serious problem, no question about it.”